Black hole as video: M87* in time, space and frequency

In April 2017 the Event Horizon Telescope (EHT) observed the super-massive black hole M87* and provided a first image of its shadow that went around the world. Researchers at the Max Planck Institute for Astrophysics have now reconstructed a video of the immediate surroundings of a black hole from the same underlying data. This not only confirms previous findings, it also hints at new structures and dynamics in the gas disk around the black hole.

Black holes are black because they capture any light that falls on them, but their surroundings can be bright. For example, the black hole M87* at the centre of our neighbouring galaxy M87 is surrounded by a maelstrom of gas, which forms a brightly glowing disk fuelled by matter falling into the black hole. Seen from Earth, M87* appears tiny because of the large distance. The angular diameter of the black hole is equivalent to that of a pinhead in New York viewed from London.

In order to image its disk, the EHT collaboration had to combine seven radio telescopes distributed all over the Earth into a single, Earth-sized telescope. This was the only way to achieve the angular resolution required to observe M87* directly. This image not only shows the spectacular gas disk with the shadow of the black hole in the centre; it also allows us to determine properties of the black hole and test physical theories, such as the general theory of relativity.

The data from the seven radio telescopes do not directly contain this picture. The petabytes of raw data taken by the individual telescopes through synchronous measurements over a one-week period had to be combined, correlated and calibrated using supercomputers. Afterwards, the data describe how strongly the brightness distribution of the real image contains certain wave patterns, whose orientation and length are determined by the distance and relative position between telescope pairs. If all the possible wave patterns of an image were measured, it would be easy to get back the original image. However, after the correlation and calibration of the raw data only a few kilobytes of data remain, which corresponds to only a tiny fraction of the full image information. Therefore it is necessary to make plausible assumptions about the source in order to reconstruct the original image, for example that the source does not change erratically from one location to the next. In this way, the EHT collaboration was able to obtain the famous image of M87* (see bottom right of Figure 1).

Using this incomplete data, the team of scientists from the Max Planck Institute for Astrophysics (MPA) was able to compute a frequency-resolved video of the gas disk around the shadow of M87* (see Figure 2). For this the scientists used the data of the entire one-week observation campaign, during which the gas disk is expected to evolve. The diameter of the disk is several light days and the gas inside it flows at a significant fraction of the speed of light. Therefore, changes in the disk’s brightness distribution are expected on a time scale of days. For a video the data is even sparser than for the image as it contains a separate image for each frame. Therefore, the MPA team additionally assumed that the brightness changes by a limited amount not only spatially, but also temporally and with regard to the measurement frequency.

The algorithm used to compute the video uses information field theory developed at the MPA (see Figure 2). The video algorithm combines knowledge about the positivity of brightness with its correlations in time, space and frequency to generate not only individual images, but a spectrally resolved video. Since the sparse measurement data cannot determine all image properties beyond doubt, uncertainties remain. The algorithm is derived from probability theory and provides not a single video, but a set of possible videos. The differences in these videos reveal the uncertainties, and their common average exhibits the structures identified with near certainty. This averaged video is the main result of the MPA scientists’ study, with their findings now published in Nature Astronomy.

This new video shows that the brightness distribution of the gas disk around M87* changes slightly within a week (see Figure 3). A number of structures that show up around the gas disk in the EHT collaboration’s image are not found in the video (see Figure 1). These were probably artefacts of the EHT collaboration imaging. However, two luminous structures outside the disk seem to be robust. These could possibly have been created by an outflow of hot gases from the disk.

The algorithm provides a new way to observe the time-varying universe, which includes black holes themselves as well as their evolving jets. A particularly exciting target for future applications is Sagittarius A*, the super-massive black hole at the centre of our Milky Way. Because it is significantly smaller than M87*, it changes on timescales of minutes, making it impossible to use conventional imaging methods. The algorithm is not limited to the radio range; a modified version adapted for the GRAVITY infrared instrument recently discovered a fast star passing Sagittarius A*. 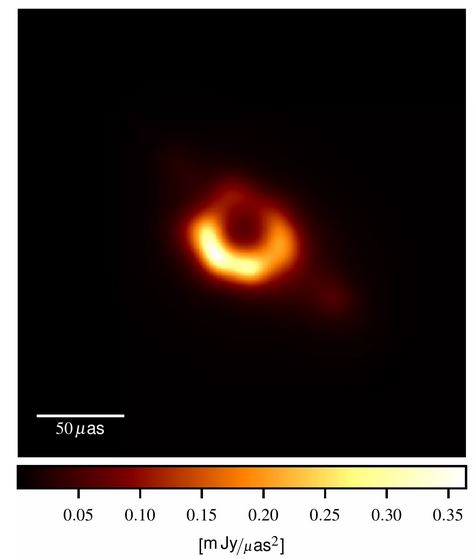 Helligkeitsverteilung am ersten Tag. © MPA
Back