In the past, mountain regions were regarded as healthy places for hay fever sufferers due to a low occurrence of airborne pollen compared to lowlands. Recently, however, highlands seem to have been more strongly affected by climate change than other regions. Global warming could be a major cause of biodiversity change on mountain tops. A general rearrangement of the Alpine flora could result from an elevational shift in species ranges.
Phenology, the science of recurrent seasonal events, can help us understand the influence of global warming on changes in plants of the Alpine region. We evaluated the influence of altitude on plant phenology for 1971–2000. Our attention was focused on flowering of widely distributed plants in Europe, including some important allergenic species. We calculated the dependence of phenological mean dates on altitude for different phenophases (BF -beginning of flowering, FFO - first flower opens, FF - full flowering) using linear regression. Results show a statistically significant linear dependence of mean dates on altitude. In contrast, phenological trends and temperature trends show a less strong, often non-significant, dependence on altitude.

Furthermore, biogenic and anthropogenic sources of volatile organic compounds (non-methane hydrocarbons; NMHCs) that are important climate relevant ozone precursors are investigated with a GC-FID (gas chromatograph with flame ionisation detection) system deployed at the Environmental Research Station Schneefernerhaus (UFS). In addition to on-line measurements at the UFS, the distribution of NMHCs under the influence of different meteorological conditions along the KLIMAGRAD altitudinal gradients in the Werdenfelser Land is observed in the context of measuring campaigns. The exact composition of these NMHCs provides important information on biogenic and anthropogenic emissions for the production of ozone, aerosols, and other photochemically formed compounds. It is important to understand the processes of formation and transport of those compounds in meteorologically and topographically complex systems. Most studies so far concentrated on metropolitan areas or airborne measurements in the free atmosphere. The behavior of NMHCs under different meteorological conditions along altitudinal gradients of 2000 m is still quite unknown. In the framework of the project impacts of long range transport, tropospherical background, and local emissions on the NMHC composition will be investigated in combination with other continuously monitored trace gases and aerosols. Thus, an apportionment and quantification of source contributions can provide important information on discriminating air masses originating from the atmospheric boundary layer, the injection layer, and the free troposphere.

Current climate change research has set its focus on carbon dioxide (CO2) as one of the most important greenhouse gases. The global distribution and the observation of long term variation are of special interest. Further research is required for processes on local and regional scales, due to the large complexity of high spatiotemporal variability of source and sink strengths and atmospheric mixing. In this context, a differentiation between anthropogenic and biogenic sources also in regard to a large scale carbon balance is an important step. Latest developments in measurement techniques enable continuous monitoring of stable carbon isotopes and allow to draw conclusions on sources and source areas utilizing isotopic ratios (e.g. d13CO2).

In-situ measurement of formaldehyde (HCHO) as an indicator for VOC oxidation, biomass burning, and validation of satellite data, is of special importance. HCHO is a key compound in atmospheric chemistry, important radical source, ozone precursor, and indicator for atmospheric photochemical activity. In this respect the apportionment of production mechanisms into primary or secondary and anthropogenic or biogenic origin plays a crucial role. HCHO is also an important carcinogenic substance.

The linkage of the d13CO2 isotopic ratio and HCHO with the additional set of continuously monitored atmospheric trace gases (e.g. NMHCs) and aerosols provides a good database for multivariate receptor modeling and other statistical methods to perform an apportionment of anthropogenic and biogenic sources as well as the determination of the origin and age of air masses.

Monitoring of permafrost in the Zugspitze summit area

Changes in the permafrost area are not only an indicator for changes in the climate, but they are also crucial for the stability of rocks and dangers of rock fall. The permafrost found in the slopes behind Schneefernerhaus may be affected by a warming climate.

The Chair of Engineering Geology at the Technical University Munich is monitoring the permafrost in the summit area and in the tunnel behind Schneefernerhaus together with the Bavarian Environment Agency. 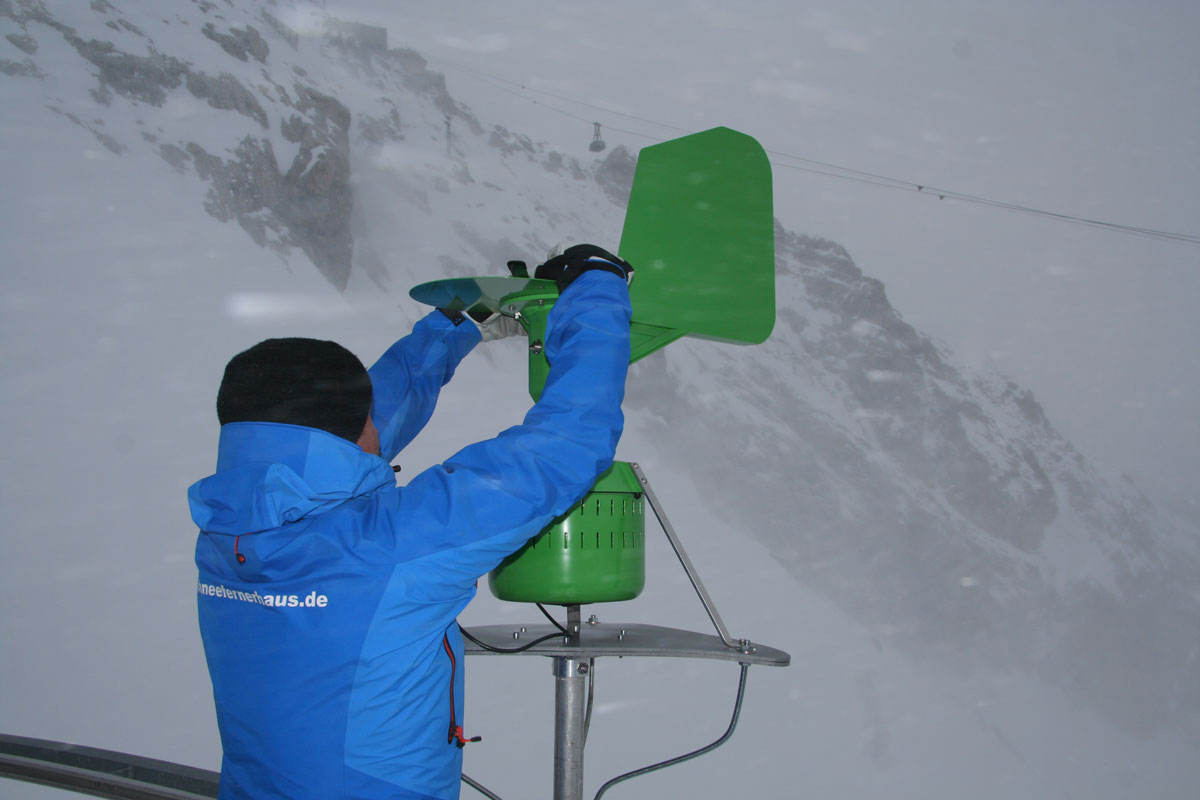 Collecting pollen from the atmosphere.

Influence of high mountain climate on allergies and environmental diseases

Allergies are one of the greatest health challenges in most societies of today. Allergy problems are expected to increase with the threat of climate change.

Collecting pollen from the atmosphere.

This project is to assess the effect the high mountain climate has on allergic reactions at a height of 2600 m. The effect the high mountain climate has on selected patients and volunteer subjects is to be examined with regard to targeted parameters of the allergic reactivity as well as phenotypical characteristics of atopic diseases under standardized conditions. These studies should include in vivo and in vitro parameters. Here, examinations in particular with regard to skin function and skin condition in view of atopic eczema as well as allergic respiratory diseases are to be referred to.